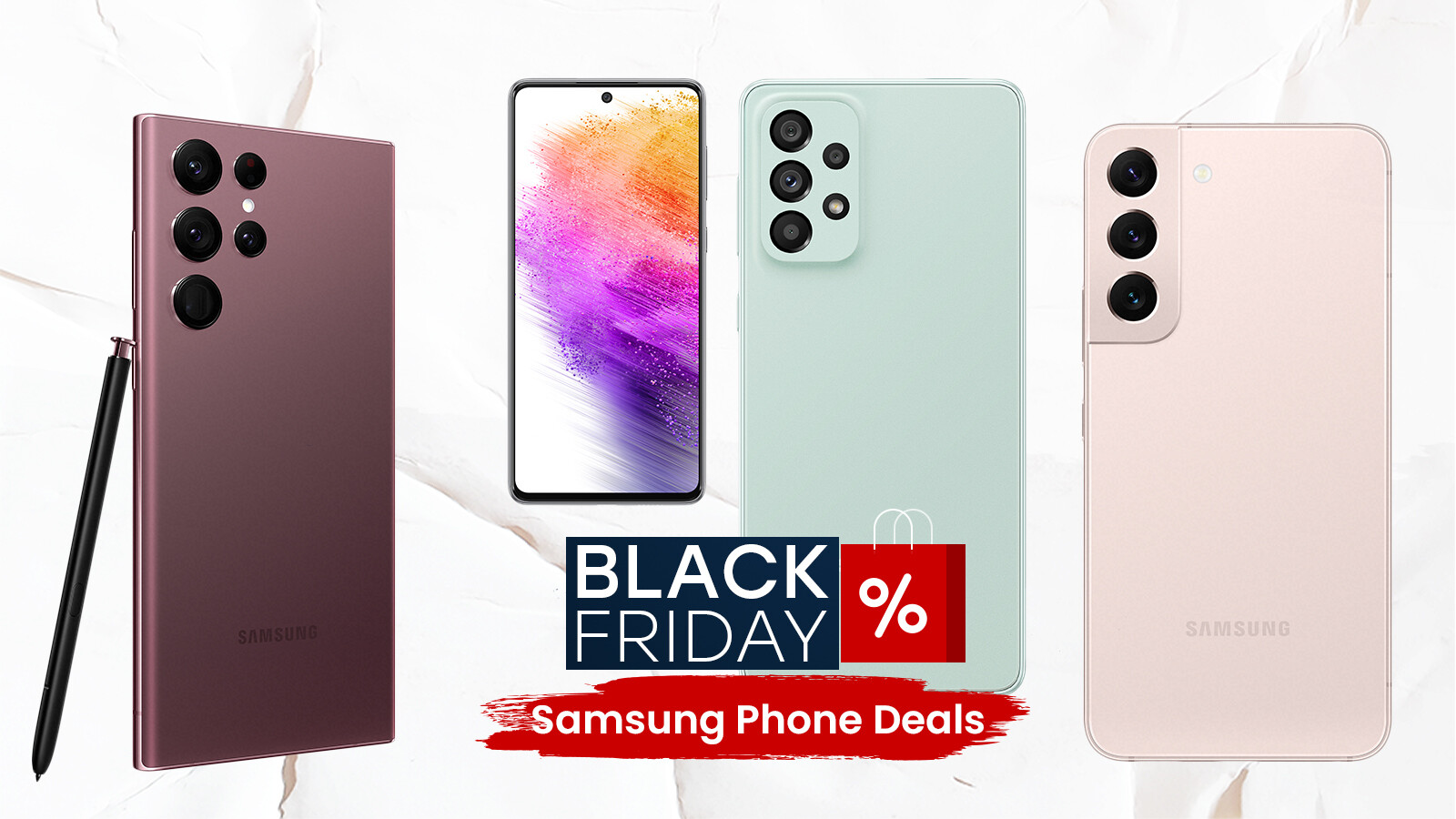 from the past and speculate on the near future, so you know what to expect on the day of the shopping event!

The Galaxy Z Flip 3 and Galaxy Z Fold 3 kicked in the door with great deals from launch. Some carriers and retailers had pretty generous trade-in plans for the pre-order stage, others — like Best Buy — had straight-up price cuts. A few days after the phones launched came the Labor Day deals and another round of discounts.
When it comes to Black Friday phone deals, we expect the Galaxy Z Fold 3 will be back again with massive discounts, and probably even more generous money-back offers if you trade-in an old device in good condition.

The Z Fold 3 improved on an already working formula — the Samsung Galaxy Z Fold 2 was a pretty good foldable when it came out in 2020 and it’s still an impressive phone today. And, since it’s a bit long in the tooth, you can expect it to have deeper discounts in the Black Friday phone deal listings.

The Z Flip 3 hit the ground running with a super-aggressive price (for a foldable that is) and a bunch of cool offers from the get-go. There is no doubt in our collective mind that there will be cool Black Friday phone deals involving the Galaxy Z Flip 3 this November. Some have already started coming out! Follow this space for more Galaxy Z Flip 3 discounts during the Black Friday bonanza:

Last year’s Galaxy Z Flip 2 will surely make an appearance when the Black Friday phone deals start rolling out. It launched at a steeper price than the Z Flip 3 did, but since it’s now the “older” device, it will certainly need a deeper discount to draw some attention. In general, we wouldn’t recommend getting a Flip 2 over the Flip 3 — the successor is a much improved version. However, if a real bargain on the Z Flip 2 pops up during Black Friday — it may be worth it.

Samsung has already launched early Black Friday deals through which you can get the Galaxy S21 series for up to $200 off, and even more with eligible trade-in. The major carriers Verizon and AT&T were quick to follow.

The true monster of a flagship — huge display, massive camera module with 100x zoom, and support for the S Pen. Indeed, the Galaxy S21 Ultra is part of the reason we didn’t get a new Galaxy Note this year — between the S21 Ultra and the Z Fold 3, there isn’t much room left for a Note that’ll be different and enticing enough. Or, that’s what Samsung probably thought.

In any case, the S21 Ultra is the biggest, baddest Samsung phone you can buy right now without going foldable. And it’s the best camera system on a Samsung phone currently available. It starts at $1,199 but we often see a $200 price cut, and we might even see more come Black Friday 2021. Maybe even up to $800 off or more with the proper trade-in. Carriers will also probably have massive discounts if you sign up for an unlimited plan.

The deals have started coming in:

The Samsung Galaxy S21 series managed to hit a sweet spot with consumers and had triple the sales in their first month, compared to last year’s Galaxy S20. Their fresh design clearly played a role in that, but the fact that Samsung managed to scale back on the exorbitant pricing might have had something to do with it, too.
The Galaxy S21+ is meant for those that want a big-screen phone but don’t necessarily care about the crazy camera of the S21 Ultra (and thus, save some money). It’s a full-on metal-and-glass monster of a phone that somehow manages to look sleek and elegant. It starts at $999.99 but Samsung and other retailers are not shy to discount it quite often, dropping it to $799.99 outright. We are quite sure that there will be plenty of Black Friday deals for the Galaxy S21+.

Here’s what we have so far:

The “entry level” Galaxy S21 is actually no joke. It’s the smallest of the three and is aimed at people who would rather have an easily pocketable device than a camera powerhouse. Still, the Galaxy S21’s camera is nothing to snark at and produces some great images. It goes without saying that the hardware on the inside is flagship-grade all around. The only corner cut here is the back panel — the S21 has a plastic back, but the bumper around its sides is still cool metal. It starts as low as $799.99, depending on carrier choice, but nowadays there are plenty of Galaxy S21 deals out there that often make it as cheap as $699.99. We can only imagine these offers will grow and the prices will shrink once Black Friday phone deals 2021 rolls about!

The Samsung Galaxy S20 series are still fairly fresh off the shelf from 2020, and a spectacular choice of a premium 5G handset even in 2021. They can offer immense value to consumers who are looking for the next-best thing to—well, the Galaxy S21 series. These are most likely seeing greater Black Friday deals than the S21, as they’ve aged just enough to warrant great sale prices while still offering top performance.

The S20 family first introduced high refresh rate 120hz panels and 5G technology into the Galaxy series, and it’s here to stay. They are also the last series to retain the slightly curved-edge display, which Samsung did away with this year.

The Samsung S20 base model is the smallest of the three, and the cheapest (after the FE, that is)—but it’s still no less than a powerhouse that should meet the needs of both hardcore and casual users. It’s got the Qualcomm 865 processor (all three models do, in fact, but only in the U.S.), with a 4,000mAh battery to keep it powered up.

The S20+ may be the middle model here, but it’s far from middling. With a 6.7-inch display, it packs nearly the same screen size and power as the S20 Ultra, but is much more wieldy—as it’s rather a tall phone but very manageable in terms of width.

If you crave more screen real estate along with still being able to maintain a solid single-handed grip around it, the S20+ may be the one for you. It’s supposed to be priced starting at $1199.99, but we don’t doubt we’ll see it for under $1000 at least somewhere this Black Friday!

The Galaxy S20 Ultra is the phablet of the bunch, featuring a massive 6.9″ screen, and 100X Space Zoom—the two smaller models only zoom 30X. It’s got a 108MP main camera, leaving the other models’ 12 megapixels far behind in the dust. Its 5,000mAh battery is also the biggest of the bunch, as befits such a monster. It’s also the priciest at them all, starting at $1399.99 when released, but we know Black Friday will knock quite a bit of that off, since it’s now an older model that needs to go.

The “fan edition” model of the series is the most recent FE model from Samsung, and very similar to the S20 base model. It sells at the lowest price out of them all, at $699.99—although we’re waiting for this to drop this Black Friday—and has compromised on the S20’s RAM, screen sharpness, and overall design to include a slightly larger screen, bigger battery, and 32MP selfie snapper.

The S20 FE is meant to integrate the most sought-after features of the series, and it’s your choice whether to love it or hate it—but it’s by far the cheapest one, and getting even cheaper when the Black Friday deals come about!

Samsung absolutely proved that it can play the midrange game when it feels like it. The A72 and A52 were both really good upgrades over their previous generation counterparts and brought quality Samsung experience to the masses.

The Galaxy A72 is pretty and elegant without being too flashy. Its body is made of plastic, but that at least makes it feel light and well balanced. Which definitely helps, considering it has a pretty big, 6.7-inch screen. Its cameras are definitely above average and employ all the Samsung tricks for amping up the colors of the images, bringing balanced HDR, and sharpening details up. The big AMOLED screen has a 90 Hz refresh rate and the phone is powered by an upper-range processor — not the best, but certainly nowhere near bad.

The Galaxy A52 is a slightly downgraded version of the A72, but not too much. The processor and RAM are the same, it’s just that the phone is slightly smaller — so, a smaller display and battery. The A52 lacks a telephoto camera for portrait shots and instead has a macro camera with arguable usefulness. However, it drops the price quite considerably. Its MSRP is $499, but at the time of writing this, you can nab it for $425 or even get a deeper discount with a trade-in. It goes without saying, the Galaxy A52 deals on Black Friday 2021 will make this phone even more of a steal.

The Galaxy A42 is mostly an A52 in sheep’s clothing. Indeed, the only big thing that seems to be downgraded here is the screen — locked to 60 Hz from the A52’s 90 Hz. The Galaxy A42 also sports a slightly larger battery, but slower charge speed, and slightly different camera sensors. Still, its camera array consists of main wide camera, ultra-wide, and macro cameras. It launched as a Verizon exclusive and we believe it’s fair to assume that Verizon will basically be giving these away with unlimited plans, come Black Friday. If you can grab a Galaxy A42 for up to $200, we’d say it’s a good deal.

The Galaxy A32, on the other hand, is a pretty noticeable downgrade. Its screen is no longer a brilliant Samsung AMOLED, but a TFT LCD panel and its processor is switched for a MediaTek Dimensity. Its camera array seems to be pretty much the same as the A42, save for the selfie camera, which is lower-res than on the A42. The Galaxy A32 has an MSRP of $279.99, which is already affordable for a smartphone, but we do recommend picking one of these up only if you can find them discounted. And we’re pretty sure they will get a price slash on Black Friday phone deals this 2021.

The Samsung Galaxy A12 is an entry-level Samsung phone that’s already pretty cheap at $180. Still, come Black Friday 2021, the Galaxy A12 might be discounted by something like $30 up to $50. Nothing special here — you will get the Samsung look and software, but don’t expect it to fly or take the best photos. Still, if you are on a budget, you might be able to score one for cheap this Black Friday, which can be good. Better a low-level smartphone than no smartphone at all, yeah?

Where are the best Black Friday Samsung phone deals?

Big stores like Best Buy and Amazon are a safe bet when it comes to where the best Black Friday phone deals will be. Other big stores like B&H Photo, Walmart, and Target are expected to offer some great discounts on Samsung devices too. Samsung’s online store is expected to offer discounts as well. If you need a new phone contract, then you’re in luck, as the big network carriers AT&T, Verizon, and T-Mobile will surely have their own Black Friday sales.

What Black Friday phone deals can we expect this 2021?

Most probably you can expect the Galaxy S21 series to have plenty of offers. Samsung’s A series of smartphones are not excluded, as they surely will also see some good deals during Black Friday sales. You can count on Samsung’s foldable phones having discounts too. Samsung tablets, like its S7 and A7 devices, should also be on sale. Smaller tech like Samsung’s Galaxy Watch 3 and the Galaxy Watch Active 2 should make an appearance too. Samsung accessories like the Galaxy Buds Pro and the Galaxy Buds Live are expected to be on sale during Black Friday as well.