Sigma CEO Kazuto Yamaki confirmed that the firm has been working on new mount options for its well-regarded third party lens options, and indicated that he’d like to launch at least one of them in this calendar year. The remarks came in an online question-answer video (Japanese). 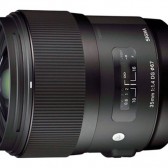 “From the standpoint of a lens manufacturer, I always want to support as many mounts as possible,” answered Yamaki. “I can’t say which mount, but I think I could add at least one [mount] this year.”

While it might seem obvious that the Canon RF mount would be the best logical choice, Sigma has been promising Fuji X-mount users lenses for more than a year. That smaller market may prove a more intensely-rich vein of demand given that there aren’t many X-mount options aside from Fuji’s own expensive OEM lineup. This may make most sense in an environment where Sigma previously indicated it can’t keep up with production, even as it has added another major manufacturing building to its campus.

Previous interviews with the CEO, who is also the primary owner of the privately-held Sigma, revealed that the firm was experimenting with RF and Nikon Z mount options.

The remarks reported this morning do not preclude the firm launching more than one new mount in 2022.

Sigma’s older Art lenses, while generally well-liked among Canon EF mount users, were never fully adapted to mirrorless, instead gaining internal adapters for the RF versions. The company’s more recent designs have been true mirrorless lenses, but available only for Sigma’s L-mount and Sony E-mount.